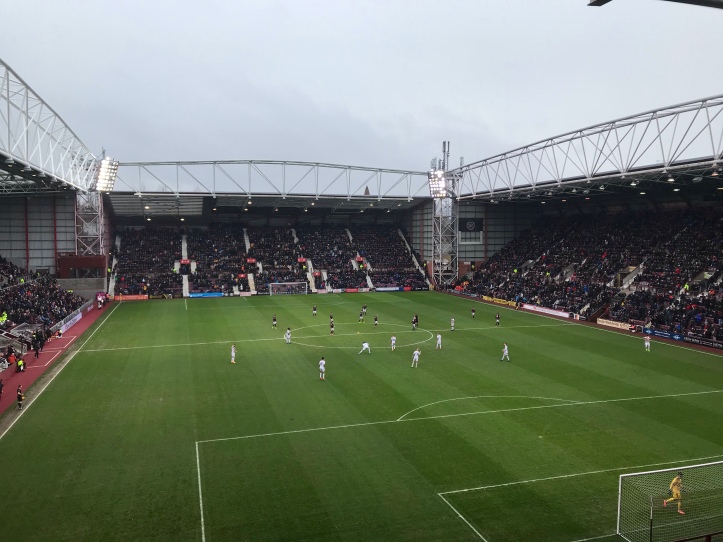 Ten-man Hamilton earned a draw in the dreadful conditions at Tynecastle yesterday afternoon.

Marios Ogkmpoe scored a brace inside the first 16 minutes and Accies looked on route to win in the capital for the first time in 43 years, but Jamie Hamilton was harshly sent off for third time this season and that changed the game completely.

Jamie Walker pulled one back early in the second half and despite Storm Denis making its presence, the Jambos levelled three minutes from time as Craig Halkett headed home from close-range.

Daniel Stendel made three changes from the side that were beaten 5-0 by Celtic on Wednesday evening with Uche Ikpeazu, Aaron Hickey and Bobby Zlamal returning in goals.

Hamilton came out flying and took the lead on the fifth minute. Scott Martin broke free through the middle of the park and found himself clean through on goal before squaring to Ogkmpoe, who slammed home from just inside the penalty box.

Brian Rice’s side just aren’t having any luck at the moment as this time Aaron McGowan came off injured after 12 minutes and was replaced by Blair Alston. That is now the third game in a row that Accies have been forced into an early substitution.

It didn’t affect the visitor’s momentum as they were awarded a penalty soon after when Marios Ogkmpoe was bundled over in the box by Sean Clare. The big Greek dusted himself down and sent Zlamal the wrong way to double Hamilton’s advantage as the jeers rang around Tynecastle.

However, on the 20th minute the game changed completely as Accies were once again on the end of a poor refereeing decision. A long ball forward was chased by Liam Boyce and Jamie Hamilton’s header ended up striking his arm. It was the assistant who raised his flag and told advised Kevin Clancy to send him off. It was very harsh on the 17-year old, who has now been given a straight red card three times this season having played just 10 games.

From then onwards Hearts dominated the game, with Accies willing to sit in and let the home side try to break them down.

They were struggling to create chances though, with the only memorable chance being when Ikpeazu got on the end of Hickeys cross. His initial effort was saved by Luke Southwood, before his rebounded effort went over the bar.

The Jambo’s pulled one back three minutes into the second half when Jamie Walker latched onto Steven Naismith’s through ball and slotted his effort under Southwood.

Hearts couldn’t keep up the tempo and again struggled to break down a dogged Accies defence as the torrential rain continued to pour down to the point that the away fans were struggling to see the game.

On the 80th minute, Southwood make a brilliant save to deny Walker, before Boyce headed the rebound off the crossbar.

The three points were snatched from Hamilton in the final few minutes as substitute Conor Washington crossed towards the back-post where it was met by Craig Halkett and he headed home.

It was a tough one for Accies to swallow, but there is no doubt that had the handball decision not gone against them that they would have won with ease.

The long wait for a win at Tynecastle continues. The only SPL ground that I haven’t seen Hamilton win at. 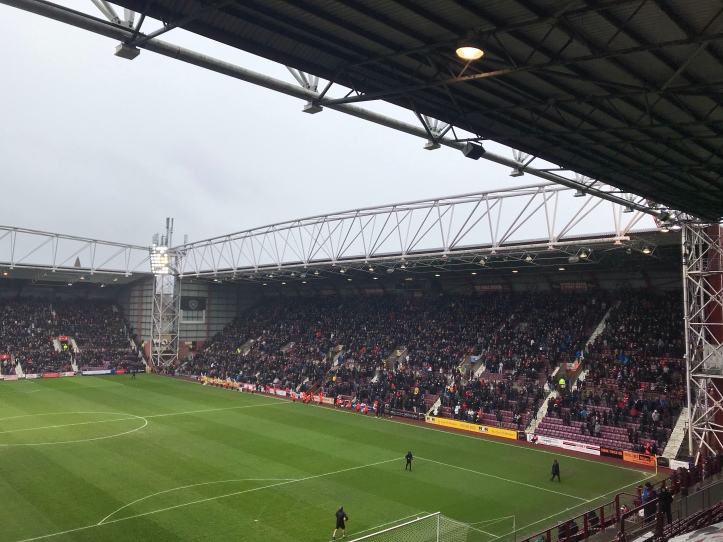 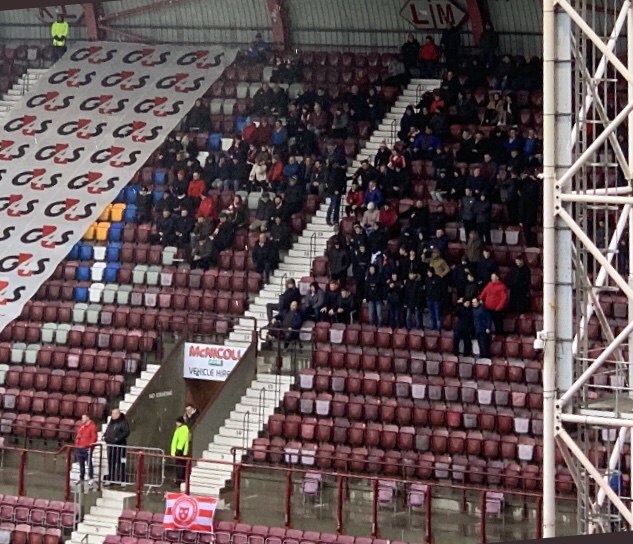