Spending my October break Groundhopping in the Czech Republic

Domestic football returned on Saturday afternoon after a weeks international break. During the time off we saw Scotland get battered by Russia in Moscow before hitting San Marino for six at Hampden. Normally I tend to go to a couple of English games, but during this break I decided to jet of to Prague for a couple of days with my girlfriend and luckily for me there was plenty of fantastic sporting events on offer.

My first game came on Monday evening, when I watched an International friendly between Czech Republic and Northern Ireland at The Generali Arena, the home of AC Sparta Praha. I was treated to a five-goal thriller which went the way of Northern Ireland as they prevailed 3-2 winners, winning their first away international friendly in 13 years. The victory came just three days after England were surprisingly beaten by The Czech’s.

However, it was a complete different side that faced England as Jaroslav Silhavy made 10 changes, and Michael O’Neill’s men took advantage of a very unorganised Czech Republic side.

Northern Ireland survived an early scare as The Czech’s nearly took the lead after four minutes when a cross by Josef Husbauer’s found Radim Reznik and his powerful header was palmed away by Michael McGovern.

It was O’Neill’s men who took the lead on the ninth minute when Middlesbrough’s  Paddy McNair latched onto Liam Boyce’s low cross and fired it into the right-hand corner past Jiri Pavlenka.

The home fans were beginning to get very restless as their side were playing a very dangerous game by continually playing tight football in front of their own goal, and both Boyce and Stuart Dallas were almost presented opportunities.

It was 2-0 midway through the first-half, when a corner caused all sorts of trouble in the Czech’s box. The ball fell for Tom Flanagan, who’s effort was blocked but Johnny Evans was there to slide home the second attempt.

Things continued to get worse The Czech Republic when McNair raced onto Steven Davis’s through ball and coolly took it round Pavlenka and slotted home to make it 3-0 at half-time. 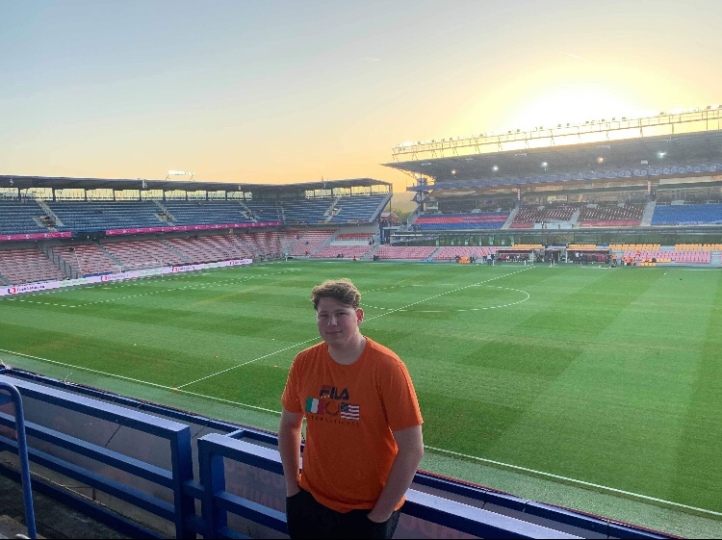 Unsurprisingly there were a couple of changes at the break, with Vladimir Darida, Ondrej Celustka, Jan Boril and Zdenek Ondrassek all coming on.

The game swung the hosts way as they upped the urgency with Ondrassek seeing his effort blocked by Craig Cathcart, before Ladislav Krejci’s effort was saved by McGovern.

The hosts pulled one back on the 67th minute, when Ondrassek teed the ball up for Darida, who’s effort went through a crowded penalty area and into the roof of the net.

Before Northern Ireland could get their breath back it was 3-2, as Alex Kral burst forward and his powerful effort flew past McGovern and into the left-hand corner, which made things a lot more interesting.

Michael O’Neill’s men had to dig in deep, but managed to just about hold onto their lead to claim the win in Prague, sending the couple hundred away fans home delighted.

Before travelling to Prague, I had heard many good things about the ice hockey in Czech Republic, so on Tuesday I watched Sparta Praha v HC Litvinov at the 02 Arena, with an amazing attendance of 8,810. With tickets being just £5 its tremendous value to watch one of the best and well supported teams in Czech Republic.  It was an amazing experience and a brilliant atmosphere.

Sparta, who were huge favourites coming into the game went 1-0 up after just 40 seconds gone in the first period through Adam Polasek, but three quickfire goals from Richard Jarusek, Jan Mysak and Martin Hanzl stunned the 02 Arena and put Litvinov 3-1 up after the first period.

In Period Two, Sparta were in complete control as the fans were right behind them. They managed to pull themselves back level as both Miroslav Foreman and Lukas Pech slammed home from close range towards the end of the second period.

Litvinov were struggling to keep up with the pace of the home side and if anyone looked to be winning the game now, it was certainly Uwe Krupp’s men.

However once again Litvinov silenced the home fans as they regained the lead against the run of play early in the this period.

With the frustration building as the clocked ticked down, both sides had players sent off for two minutes for fighting and while both were down to five, Sparta levelled at 4-4 with four minutes remaining as Andrej Kudrna’s effort went under Jaroslav Janus in the Litvinov goal.

With the game ending in a draw, overtime was needed to separate the two sides and it was Sparta who won the game as Forman scored his second goal of the night, right in front of the ultra’s which produced some scenes.

On Wednesday I travelled to The Sinobo Stadium to watch the Last 16 of the Women’s UEFA Champions League between Slavia Prague and Arsenal.

After talking to a couple of locals, they told me that Slavia are trying to push the women’s game this season and have been playing their games at the men’s stadium as well as giving out free tickets to people up to the age of 18.

At the game on Wednesday it was another electric atmosphere with some of the Slavia ultras turning up as well as another 5,000. The Official attendance was 5,248 which is one of the best women’s attendances I’ve ever seen.

Arsenal ran out 5-2 winners on the night and its fair to say they were a class above their opponents. Vivianne Miedema scored a first-half hat-rick before adding a fourth early on in the second-half.  Scotland’s Kim Little dispatched a penalty to make it five just before the hour mark.

The Slavia Prague fans continued to back their side and were rewarded for their support as both Katerina Svitkova and Mia Persson pulled goals to reduce the deficit going into the return leg in London next week.

The home side started the game well and looked to be containing Arsenal, but in the 24th minute the opening goal arrived. Following a poor header in midfield it was Beth Mead who picked up the ball before sliding Miedema clean through on goal and she made no mistake as she slotted it under Olivie Lukasova.

I felt terrible for the 18-year old as she made a vital error which allowed Arsenal to double their lead.  It came from a simple through ball which Lukasova came out to kick, but she completely missed the ball and made a real hash of it and Miedema tapped home into the empty net to score the easiest goal she will score all season.

Miedema completed her hat-rick on the 38th minute when Leah Williamson’s defence splitting sent Danielle van de Donk on her way. She burst into the box and saw her shot saved but Miedema was in the right place at the right time to fire the rebound into the roof of the net.

The home side were really struggling and Arsenal looked as if the could score as many as they wanted.

On the 51st minute it was 4-0. It was a brilliant move by the North London side as some quick passes pulled all the Slavia defenders out position before eventually the ball was worked out to Williamson, who’s low drive across the face of goal was tapped home at the back-post by Miedema.

Five minutes later Arsenal were awarded a penalty as Kim Little was pulled down in the box by Tereza Szewieczkova. The Scotswomen stepped up and sent Lukasova the wrong way to make it 5-0.

The home fans didn’t stop their singing and I could see the joy on the faces of the fans as they saw their side pull one back when a teasing cross from Michaela Khyrova was stabbed home by Sinikova from close range.

The momentum was turning, and although this game was long over, the home side now had some belief and were beginning to get much more opportunities. They pulled another back with a couple minutes remaining when a shot by Petra Divisova was well saved by the Arsenal goalkeeper, but Persson was on hand to curl the rebound into the top corner. 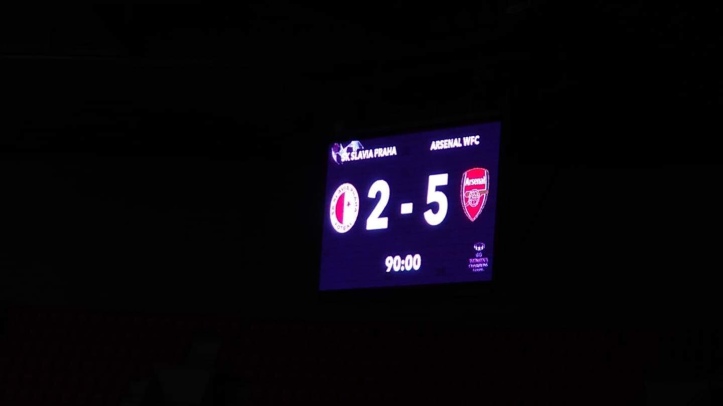