Hamilton Held By The Jags In A Dramatic Betfred Cup Clash 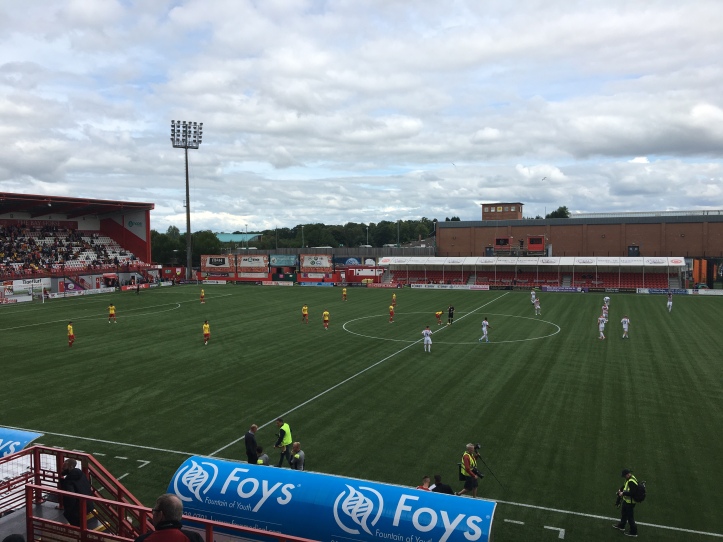 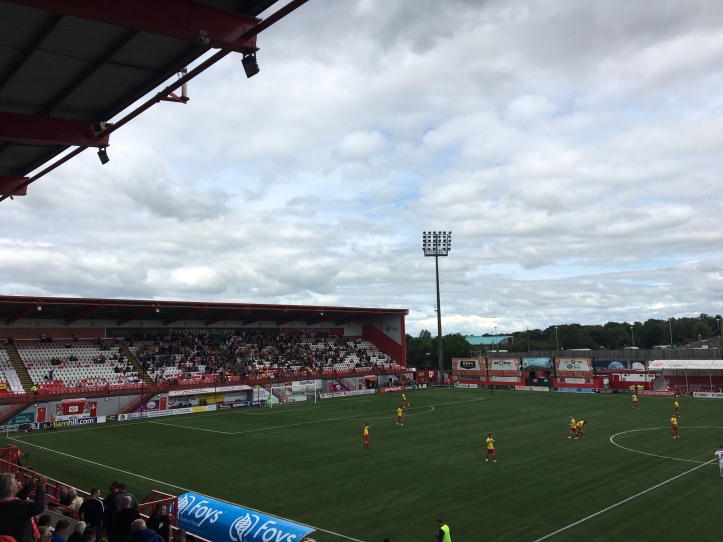 Partick Thistle took command of Group F in the Betfred Cup yesterday as they held top-flight side Hamilton to a 2-2 draw in a highly entertaining encounter in South Lanarkshire.

Ross Cunningham marked his first start for Accies by scoring a brace. The 21-year-old, who spent last season on loan at Forfar, has come off the bench 17 times for Hamilton, and he repaid the faith put in him as he smashed a volley home to cancel out Ryan Williamson’s opener before curling home from outside the box.

The game went to penalties where Accies edged out the bonus point as they won 6-5, but a win against Clyde on Wednesday would see the Championship outfit top the group and leave Accies hoping they have enough points to clinch one of the four best ranked second teams spots.

Hamilton and Partick Thistle don’t never serve up thrillers, so yesterday afternoon the fans were in luck.

Marios Ogkmpoe has had a poor start to the season and is in desperate need for a goal and he had a glorious chance on the sixth minute, when a corner caught Scott Fox in no-mans-land and found the Accies man at the back-post but he could only guide his header into the side-netting.

The deadlock was broken on the 16th minute and once again it was another defensive howler by Accies. A poor cross should have been easily dealt with, but Aaron McGowan headed it straight into the path of  Ryan Williamson, who’s lobbing effort ended up sneaking in at the back-post.

One thing I love about watching Accies under Brian Rice is the responses he gets after something goes wrong and it continued yesterday as Accies were level within a minute. Straight from kick-off, the ball was punted out to Scott McMann. He beat Williamson before his low cross was controlled and blasted home into the bottom left-hand corner by Ross Cunningham, silencing the large travelling support.

There was a lengthy delay to the first half as Ronan Hughes came out of a challenge with what looked like a serious injury. He was eventually stretchered off and taken to hospital. Here’s hoping he is okay. Hughes’s injury was followed by an Injury for Brian Easton, who was also unable to continue.

It was a great first 30 minutes of football but the injuries to Hughes and Easton broke the game up and there was no further action to report from the first half.

Accies came flying out the traps in the second half and looked the much better side from the off. Blair Alston, who’s already scored two goals since signing from St Johnstone went close on the 47th minute when a cross by McMann found the Hamilton midfielder, but his header was well saved and held by Scott Fox.

The hosts took the lead on the 54th minute and it was Cunningham who came up with the goods again. The ball was worked out the Accies man before he cut inside onto his right foot and curled an absolutely beauty into the far top corner, leaving Fox rooted to the spot.

I was hopeful at this point that Accies would be able to see the game out as they looked comfortable and looked like getting that vital third goal to kill the game.

Lewis Smith was my MOTM against Clyde on Wednesday night and he was having a rather quiet game until the 56th minute when the received the ball into his feet before he spun by his man and fired a powerful effort at goal, which came crashing down off of the underside of the bar.

George Oakley was next to come close for the home side as they continued to ask questions of the Thistle defence. A cross was delivered which found Oakley, but he headed just wide of the post.

Out of absolutely no where Thistle drew level. Accies were caught napping as the away side countered on the break. Kenny Miller was away down the right-hand side before he squared it across goal for Shea Gordon to fire home into the roof of the net from 10 yards out.

Accies once again bounced back immediately and went straight up the park and were awarded a penalty as Oakley was bundled over in the box by Sean McGinty. Aaron McGowan was chosen to take it which had a few people confused in the crowd, as he looked absolutely shattered and also isn’t our regular penalty taker. McGowan stepped up blazed his effort miles over the bar.

With Brian Rice knowing that Accies simply had to win, he sent a few more bodies forward, which made it an open game as The Jags wanted to win it and seal top spot.

On The 76th minute Accies were five against three on the break. Smith played it out to Cunningham, who slid in McMann, however he took a bad touch and his eventual effort went wide.

The visitors had the best chance to take the three points and confirm top spot in Group F as on the 82nd minute the Accies defence were split open, sending Miller clean through. Normally the 39-year-old is clinical in front of goal but out came Fon-Williams to save with his legs.

Yesterday we should have won. We actually didn’t play that bad and created so many opportunities. Once again another gifted goal put us behind but we responded well and ended going up 2-1. I said earlier in my report I thought we were gonna see it out comfortably but more poor defending allowed us to get split open and let them equalise out of absolutely no where. For the penalty. Why Is Aaron McGowan hitting it?. He isn’t even our first choice PK taker and also in my opinion he was so poor yesterday and didn’t look anywhere near fit. The more I think about it maybe this is why he hasn’t played as much as we expected throughout pre-season. It was an abysmal penalty.

I am going to continue to rant on about a centre-back till we get one. Its so obvious we need one.

We have a decent chance of getting into the top four best ranked second teams if we can win on Saturday at Airdrie, and hope results go our way on Tuesday and Wednesday.

Ross Cunningham was excellent yesterday. This is his season for me. He has to prove he is capable of playing in the first team or he wont be here next season. Hopefully more of the same to come  from Ross.

Finally, my thoughts are with the man who took unwell in the away end yesterday and I hope for a speedy recovery and also to Ronan Hughes who looked to have suffered a bad injury and was stretchered off after half-an-hour.