Accies Breeze By Albion In Their Second Pre-Season Friendly 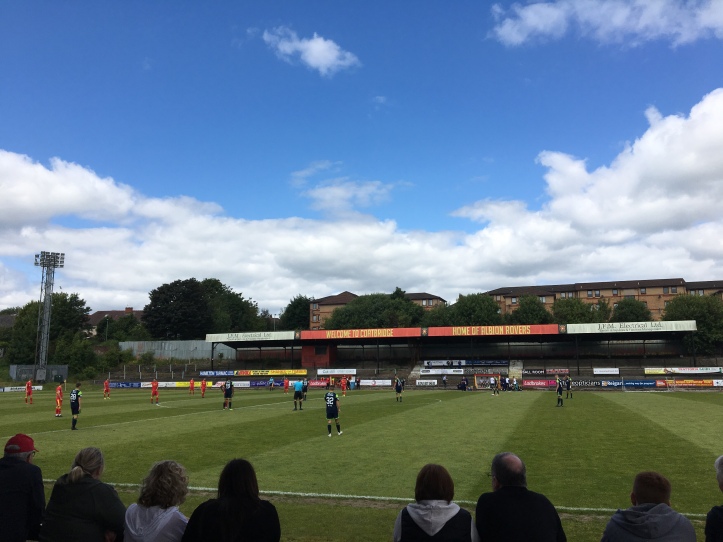 After the defeat in Kirkcaldy on Thursday evening, Brian Rice’s men made the short journey to face League Two side, Albion Rovers at Cliftonhill. Kevin Harper’s men have already had three friendlies under their belt coming into Saturdays game. They lost 1-0 to East Fife, 2-1 to Alloa and 2-0 to Airdrie. All of the games seemed to have been lost late in their games and remember all the teams they played were one or two leagues above them so Rovers would certainly be no pushover, especially at Cliftonhill, a place where Brian Rice stated “Not many people like coming here”.

Last time we faced “The Rovers” was back in 2017 when the sides served up a eight-goal thriller back in the Betfred Cup group stage. Alan Trouten scored a hat-rick for Albion, but it all looked to come to nothing as a Massimo Donati, a Shaun Want double and a Rakish Bingham goal had the Premiership side in the lead but the League Two side fought back and came from behind for a third time in the 93rd minute when Ross Davidson took advantage of some appalling Accies defending and lobbed Ryan Fulton to take it to spot-kicks.  Graham Bowman saved both Massimo Donati and Greg Docherty’s penalties to allow the man of the match, Alan Trouten to step up and score, giving his side the extra bonus point.

Brian Rice made numerous changes from Thursday game at Starks Park, giving SEVEN Accies academy players starts. It was an interesting line-up but the youngsters are held in high regard so I was expecting a good performance.  Accies also had a trialist in goal, who I believe was Kyle Gourlay. The 20-year-old was on loan at Elgin City from Dundee last season and made 38 appearances for them.

Rovers also made a couple of changes from the game at Airdrie, where they had three trialists playing.  Scott Roberts made his first start for the club since joining from Elgin City.

The game got underway in the very sunny Coatbridge.

Unlike the game on Thursday, Accies started slow yesterday afternoon and should have been 1-0 down after just a few minutes. Smart Osadolar found himself one-on-one after some good play by the Rovers trialist A, but out came Accies trialist keeper to make a fantastic save at point-blank range. The League Two side continued to play well as Accies were yet to find their feet. They went close again when a dangerous cross found Jason Krones, but his header was gathered by the keeper.

The first sight Accies got of goal was when some good foot-work by Miller gave him some space to fire a powerful effort at goal which was palmed away by Ryan Goodfellow. The next chance was when George Stranger delivered a ball into the box in hope of finding Marios Ogkmpoe, but Lewis Wilson just about cleared it before it got to the Accies striker. Hamilton’s best chance of the game came on the 20th minute when Jack Breen floated a corner towards the back-post, which was headed downwards by Alex Gogic and then somehow flicked over the bar by Miller from a couple of yards out.

The scoring was opened on the half hour mark after a dangerous delivery was initially cleared by The Rovers defence but the ball fell at the feet of Breen, who fired a piledriver into the bottom left-hand corner. The final chance of a dominant half by the top-flight club was when Ogkmpoe let fly from outside the box which was well saved the Goodfellow.

The away side got off to the perfect as they doubled their lead on the 48th minute. A terrible mistake by Wilson in the Rovers defence allowed Miller to pinch the ball and run clear through on goal and slot it home past the helpless Goodfellow.

Rovers first effort of the second half came on the 54th minute when a dangerous cross found the head of Scott Roberts who’s header went inches wide of the post.

Lewis Smith is one of the youngsters I like most and he deserved a goal yesterday. He should have scored on the 58th minute when he had three Rovers defenders on toast as he beat all three with ease, leaving two of them on the ground. He made his way into the box before his effort was brilliantly saved by Goodfellow. The rebound fell to substitute Andrew Winter who’s volley was blocked and then the ball was put to safety over his own bar by Krones.

Minutes later he was at it again as Smith danced around only two this time before bursting into the box and firing an effort at goal which was well saved again by Goodfellow. Winter was in the perfect position to fire home the rebound once again but his effort was blocked before the third effort was sent over the bar by Steve Davies.

Against the run of play, the hosts were awarded a penalty as Trialist keeper Kyle Gourlay raced off his line and brought down Ross Clarke after mistiming his jump. Declan Byrne stepped up and sent Gourlay the wrong way to reduce the lead to only one.

There was no need to worry though for the travelling Accies supporters as young Niyah Joseph scored with his first ever touch for the first team. A long ball was flicked on by Winter to Johnny Hunt, who played in Joseph. The 18 year-old took a touch and drilled an effort across goal into the far corner to restore the two goal lead. What a moment for the youngster.