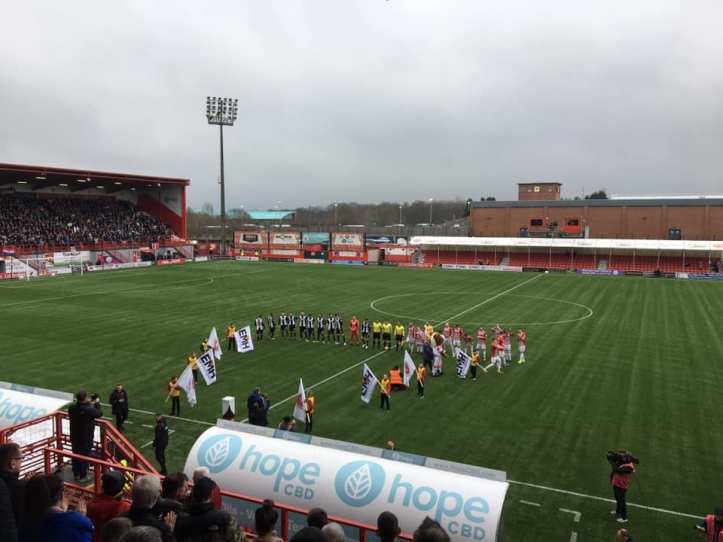 This was the game both sets of  fans have been waiting for in the last few weeks as it was the biggest game of the season by a mile. A win for Accies would probably secure SPL football next season while a win for St Mirren would close the gap between them and Hamilton to just one point and leave Dundee in big trouble.

The home side came into Saturdays  game in poor form after terrible displays at Kilmarnock and Livingston which saw them losing 5-0 and 2-0 with just two shots on target in both games combined. The Buddies would have come into the weekends game on a high after they came from behind to beat Dundee last weekend. The Dee took an early lead through Ethan Robson but an equaliser from Danny Mullen was followed by a second half header from Brad Lyons to move themselves off bottom spot and sent The Blues bottom.

There was four changes made by Hamilton boss Brian Rice for Saturdays encounter with Alex Gogic, Matt Kilgallon, Mickel Miller and Steve Davies all starting. Delphin Tshiembe, Scott Martin, Tony Andreu and David McMillan all dropped out. Aaron McGowan was deemed fit to play after he picked up what looked like a nasty injury on Wednesday.

Accies have started their last two matches so poorly and its set the tone for the game and Saturdays game was no different as they started terribly once again. The Saints should have been 1-0 ahead on the fifth minute when some slack passing around the back by Accies looked like a disaster waiting to happen. It lead to Scott McMann losing the ball which allowed Brad Lyons to go though on goal but the striker hesitated before pulling the trigger to late and his shot was deflected for a corner. The Buddies kept on pushing forward and had huge claims of a penalty on the 23rd minute when Anders Dreyer was allegedly brought down by Ziggy Gordon but John Beaton wasn’t interested. Another chance came and gone for the Saints midway through the half when a cross towards the back-post was headed over by Danny Mullen, who was stretching.

Hamilton, who had done nothing absolutely nothing until this point had a fabulous chance to take the lead when a longball was taken down  by Darian Mackinnon before the Accies captain drove towards goal and slid the ball into the feet of Steve Davies. The big striker spun by the Buddies defender but Hladky made a fine save.

The final chance of the first half was a glorious one, which went the way of the visitors. Gordon got caught under a long ball and was shrugged aside by Simeon Jackson before he sent Lyons clean through on goal. Similar to earlier in the game the Saints man got caught in two minds and elected to shoot himself and his effort trickled by the post, although he did have Mullins to his right which looked like the best option.

Accies started the second much better and on the front-foot. The first effort of the second half came when Mickel Miller ran towards the by-line before pulling off a snapshot which went under Hladky’s legs and off the post for a corner. The resulting corner led to an effort from Aaron McGowan flying into the away end.  Accies were now playing some good football and were denied by another fantastic Hladky save. Miller slid in Scott McMann before the left-backs effort was saved by the Saints keeper. The rebound fell to Miller but he was denied by another good save and the third effort was a header by George Oakley which was headed off the line by Ethan Erhahon.

The opening goal came for Accies on the 63rd minute when a beautiful cross from substitute Tony Andreu set it up on a plate for big Davies, who flicked towards goal which went in off the post, sending the home fans wild.

They weren’t celebrating for long as the visitors were awarded a penalty just two minutes after the deadlock was broken. Dreyer was have thought to have been brought down in the box by Gordon, but replays show that it was a dive, with the Dane already heading down. Dreyer himself stood up and sent Gary Woods the wrong way to make it level.

The final chance in this big game was an unbelievable save by Hladky, which could save the Saints season. Oakley hit a wonderful volley on the spin from McGowan’s cross which was saved by the fingertips of the Czech before Andreu’s header was cleared off the line. Agonisingly close.

Accies remain four points clear of the bottom two teams, but have still to meet them both again in the final five games. It looks like its going to be a tight and tense end to the season.