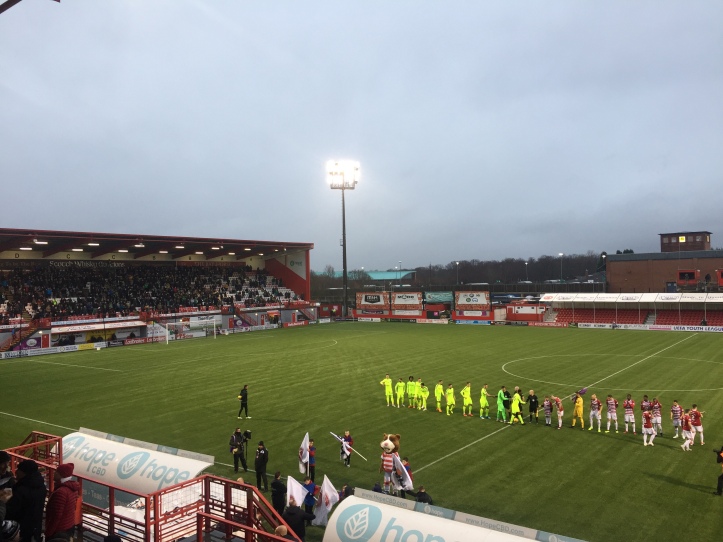 After a painful and depressing night in Dundee on Wednesday night, we returned to The Hope CBD Stadium in hope of a much improved performance against Hibernian, who are on a woeful run at the moment, not winning a game in seven games, which is a huge shock for a huge club like Hibs. The last time Neil Lennon’s men won a game was away back in October when they coincidentally hammered Hamilton 6-0, which was another horror show. After watching yesterdays game i will gladly admit that is the worst Hibs team I’ve seen in a long time and it was a real chance for Hamilton to get a result before three tough games upcoming against, Rangers, Kilmarnock and Hearts. The travelling support by the Edinburgh side is always good but the support wasn’t as good as usual on Saturday and you can see why.

Hamilton boss, Canning made 4 changes from the Disaster in Dundee midweek. Myself and the majority of Accies fans were surprised to see former Hibee Scott Martin drop out for Tom Taiwo, with Scott being one of our best players this season. Secondly to my surprise Lenny Sowah started his first game out of no where since rejoining the club in the summer. It was unsurprising to see Delphin Tshiembe removed from the squad completely after his three costly errors midweek and  Lastly, Jan Mucha was in the starting line-up but was replaced by Gary Woods in the warm-up after pulling up  injured.

Neil Lennon made three changes from there rather disappointing midweek draw against struggling St Mirren. Vykintas Slivka and Miquel Nelom replaced Marvin Bartley and Daryl Horgan. Hibs keeper Adam Bogdan also bizarrely got injured in the warm-up so Ofir Marciano stepped in with Jamie Gullam going onto the bench.

The game got underway in the down-pouring rain in South Lanarkshire with the home side starting the best. After just one minute, Mickel Miller fed the ball into Rakish Bingham, who beat the offside trap, but fired his effort high over from a tight angle. On the fifth minute, Stevie Mallan played the ball out wide for Charalampos Mavrias. His wicked cross was inches away from connecting with Florian Kamberi.  Bingham had another chance after 14 minutes when James Keating’s played him through one-on-one, but his shot was vitally blocked by Miquel Nelom, denying what would have been the opening goal. Hibs began to turn up the  heat with a good spell of pressure. On the 23rd minute, Mallan almost caught Gary Woods out with a low near-post free kick,  which hit the post before Martin Boyle’s follow-up was blocked by a combination of Accies defenders on the line. Bingham had another glorious opportunity after 30 minutes, when his volleyed effort stung the hands of Marciano,and was eventually gathered by the Israeli. The home fans (including myself) were starting to lose patience with Bingham, as we knew these chances would come back and haunt us. The best chance of the half  by  mile came just before the break when Miller beat Nelom down the line before driving into the box and cutting it back for James Keating’s, but the  striker side footed his effort wide. There was a massive delay at the end of the half as Martin Boyle suffered a really nasty concussion after colliding with Woods. I am glad to report he has been released from hospital after checks.

There was another goalie change at the start of the second half.  I Don’t think ill ever see three goalkeeper changes in a game again,. It was quite incredible. Gary Woods failed a fitness test before the re-start so was replaced by Jacob Marsden, who wasnt even in the squad at 2.50pm. This was Marsden’s debut since signing from Mildenhall Town and also his first ever professional game.  Hamilton had a huge chance just after the re-start, when a Dougie Imrie free-kick was flicked just wide by Ziggy Gordon. The defender will know he should have scored. At the other end, Marsden was quickly called into action as he pulled off a cracking save to deny Kamberi after he was played in by Emerson Hyndman. Hibs started to dominate thereafter and on the 51st minute, Shaw found Kamberi who was bearing down at goal, but Gordon pushed him out wide to make life more difficult for the Swiss before his shot was easily gathered. They continued to press and some neat play the the Edinburgh side led to Kamberi flicked on a Hyndman pass into Shaw, who’s dipping volley was well held by Marsden. The away side broke the deadlock after 65 minutes, and you could see it coming. Substitute Daryl Horgan had an instant impact as his teasing cross was tapped home by Oli Shaw to put the Hibees in the driving seat and you could hear the sigh of the relief from the travelling support. There was another nasty injury later in the game for Tom Taiwo after it looked like he done some damage to his shoulder after falling during a collision. As Hamilton went in search of an equalizer, they left themselves a little exposed on the break. Hyndman made a huge input since coming on for Boyle. He set up numerous opportunities, and this time he set up goal-scorer, Shaw, who checked back onto his preferred right foot and had a shot at goal which was  smartly stopped by Marsden’s legs. Accies never looked like scoring in the second half apart from Ziggy Gordon’s early chance and  were left to rue there missed chances in the first half, as it finished Hamilton 0-1 Hibernian.

Life doesn’t get any easier for Accies as they travel to Ibrox to play against Steven Gerrard’s Rangers, next Sunday, while Hibs will hope Saturdays victory can get there season back on track, however, they also face a tough task next Sunday as they host the recent Betfred Cup winners, Celtic at Easter Road.