On Wednesday evening, Hamilton welcomed Swiss giants FC Basel to South Lanarkshire for the second leg of their UEFA Youth League tie. The 2 sides drew 2-2 in Basel 3 weeks ago, thanks to Adam Douglas scoring a brace for the away side to pick up a shock result for the Scottish side. It sent the travelling fans home delighted and made many feel a great buzz about how good our youth system actually is, if we are competing with one of the best youth sides in the world. I did fly to Switzerland for the game which was a memory that will last forever, as well as the game on Wednesday which 2,460 fans attended, for the huge match that Accies fantastically made free admission. I have not seen the stadium with such a great atmosphere and buzz for such a long time, reminding me of the Alex Neil days in charge and even more memorably, Easter Road.

Hamilton made 2 changes from the 2-2 draw away in Switzerland with, 16 year old, Andrew Winter starting on the left wing. Kyle Munro started up-front in place of Sean Slaven who came off injured in the first leg, but was on the bench today.

FC Basel made 3 changes, firstly changing goalkeeper with Niklas Steffen replacing Felix Gebhardt,who was far from convincing  in the first leg.  Yves Jankowski received a red card late in the tie in Basel so was suspended and was replaced by Gabriele Levante. The biggest shock for me was not seeing Julian Vonmoos on the Basel team sheet. The tricky Swiss caused Hamilton so many problems in the first leg and also scored the goal to level the scoring after his side fell behind early. The 17 year old looks like a future first team player and is highly thought of. Martin Martinovic took Vonmoos’s place.

The game got underway in the very windy conditions in Hamilton, with it being a slow start to the game with both sides not wanting to press forward too quickly. Basel were first to have a real chance. With the gust of wind in their favour, they put a corner right on-top of Ross Connelly, hoping it would cause chaos and end up in the net, and it nearly did so. The Hamilton keeper got a glove on it to direct it for another corner. The Swiss side opted for the same tactic on the second corner and this time it was cleared as far as Tician Tushi, who narrowly directed his header wide. Hamilton broke the deadlock after 18 minutes and what a goal it was. Andrew Winter jostled his way by Yannick Marchand, in the Basel midfield before firing an effort past Steffen from 25 yards out, to put Accies in the driving seat. Basel had a not one, but two great chances to level the tie. Firstly, after 21 minutes when Leonardo Gubinelli couldn’t believe he didn’t score, after a cross found him at the back-post but a goal saving block stopped a certain goal. The second and best chance of the two came after 24 minutes when, Marchand was sent through 1v1  against Connelly but out came the Hamilton keeper, to turn it around with his right boot for a corner. Regan Mimnaugh came close to doubling the hosts lead after 27 minutes when his free kick from a dangerous area, was tipped around the post well by Niklas Steffen.  The away side did start to find their rhythm after going behind and did manage to equalise after 33 minutes when Adam Douglas was caught napping as Dejan Zunic was slipped in down the left, before the left back drilled a low powerful cross which Ross Connelly spilled, and it fell straight to Tician Tushi who had the easiest of finishes to poke home from point blank range. Accies responded well, with Goal scorer, Winter working another chance and nearly doubling his tally for the evening after 41 minutes when he was played clean through by Charlie Reilly, before barging past Gabriele Levante and firing his high effort just wide of Steffen’s left-hand post.

Basel got the second half underway, attacking towards the away section. The hosts started on the front foot with captain, Leon McCann going close after 50 minutes when a cross from Kyle Munro found the left-back all by himself, before controlling well but firing over. A good opportunity spurned by Hamilton. The Switzerland side tried to make the most of Accies right-back, Douglas being on a booking so decided to double up on him and on the 60th minute, the away side had a golden opportunity to put their heads in front. Dejan Zunic got free down the left before his cross met Tushi, who fired his volley wide from a couple of yards out, with Connelly rooted to the spot. Yannick Marchand was next to have an effort as Basel started to gather momentum. Nicola Suter got more joy down the left before cutting it back to midfielder, Marchand who’s powerful shot from the edge of the box just sailed over the bar. Lewis Smith nearly restored Accies lead 20 minutes from time, when he smartly beat a few men before curling and effort inches wide of Basel goal. It looked to be heartbreak for Hamilton when they shot themselves in the foot and went behind 4 minutes from full time. After constantly moving the ball around the back, the ball got passed back to Ross Connelly who slightly panicked and kicked the ball to substitute Leonardo Guadiano, who drove at the Accies defence before beating George Stranger and slotting it past the outstretched Hamilton keeper. However it does not end there. Fourth Official, David Munro held up the board indicating 4 additional minutes which got the fans to keep pushing the young lads forward in hope of an equaliser, which would see the tie go to a penalty shoot-out. Hamilton had a couple of corners which everyone went up for, but resulted in nothing. With about 1 minute remaining of the 4, Basel gave the ball away cheaply in midfield allowing Smith to pick up the ball and send Liam Scullion free down the left. Scullion found Lewis Smith, who had darted up the park. Smith slid in Sean Slaven who took it past the Lokaj ,(who slipped in the process of trying to defend), and fired it into the roof of the net, causing absolute madness. It was a moment I will never forget, with all the players and subs running onto the pitch and the stadium was rocking. The game restarted for about a second, before Norwegian referee, Rohit Saggi blew for full time, meaning a penalty shootout.

By the time the penalties were about to be taken, I could see how low Basel were as they had it in the bag before giving that sloppy pass away. Hamilton were the complete opposite. The fans were all chanting and the players looked absolutely full of confidence.

Hamilton Win 3-2 on Penalties, setting up a tie and trip to Denmark to play FC Midtijylland U19 for a place in the group stages., With the Danish side beating Bohemian Dublin 2-1 in each leg. 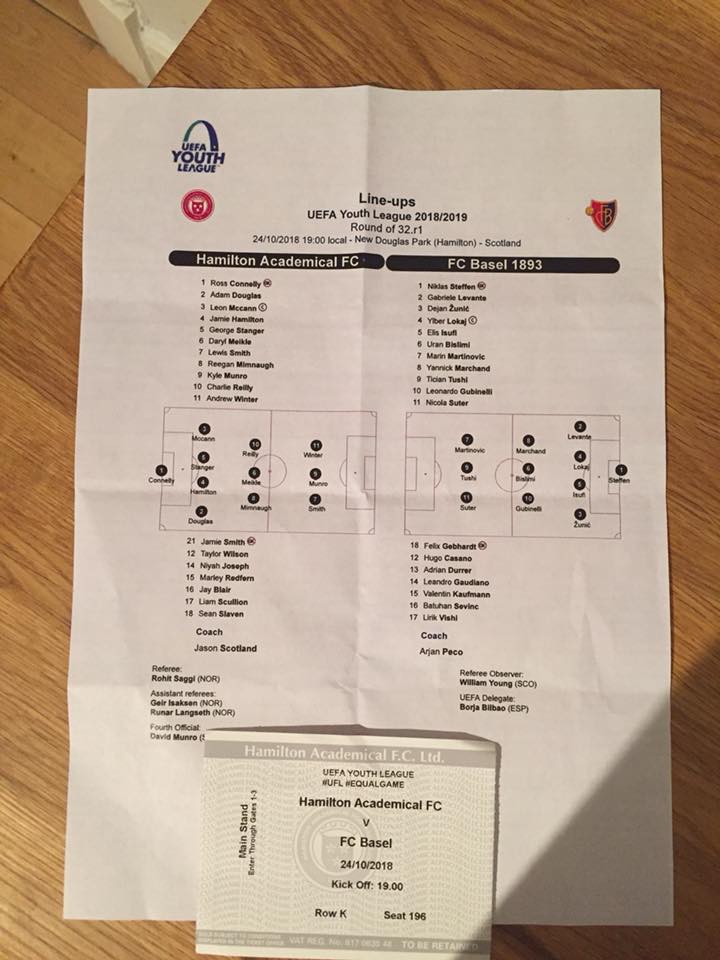