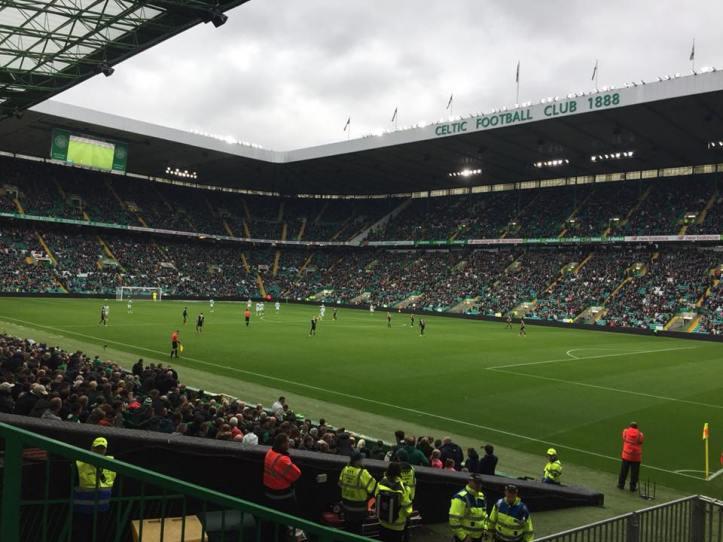 Our 4th SPL game of the season was expected to be one of the hardest. On Sunday we faced last seasons champions, Celtic. However, Celtic have really not been anywhere near as good as last seasons form, when they were the first ever Scottish side to complete the Double-Treble. Normally when going to Parkhead , I unfortunately have very little confidence of getting a result but today I had a feeling we would play well.

Celtic have started this season very poorly for their standards. The Glasgow side have already dropped points away to Hearts, 2 weeks ago, as well as being knocked out the UEFA Champions League group stages by Greek side, AEK Athens. Last weekend they won their quarter final, Betfred Cup tie away to Championship side, Partick Thistle before yet again disappointing midweek, when they drew their first leg of their Europa League tie, away to Lithuanian side FK Suduva Marijampole, where the Celts were expected to easily stride to victory. They will now have to try seal a place in the group stages at Parkhead on Thursday Evening.

Hamilton had a extra week to prepare for Sunday’s game, after being put out the Betfred Cup in the group stages. There will be no doubt that the Accies will be buzzing with confidence,after sealing a fantastic 1-0 win over local rivals, Motherwell.

Visitors, Hamilton also made a couple of changes. Derby Day hero, Steven Boyd started up-front along side Mikel Miller. The experienced Dougie Imrie started in midfield replacing Sam Kelly and Centre Back, Delphin Tshiembe started his first Accies match after impressing when coming on against Motherwell. Rakish Bingham missed out through Illness.

The game got underway at Parkhead and it was Hamilton who came flying out the traps. After 30 seconds, Mikel Miller beat a few men in the box before firing across goal. His shot was brilliantly tipped around the post by Celtic keeper, Craig Gordon. The hosts took a while to get going but after 13 minutes they put their first promising move together. Moussa Dembele set the ball up nicely for James Forrest, who’s shot came back off the post. The Champions eventually woke up and started playing a lot better and started making a couple of chances. After 24 minutes, Tom Rogic threaded an excellent through ball for James Forrest. His Cross was inches off Dembele’s head, which would of most likely been the opening goal. Celtic continued to try make an opening but couldn’t get past the very well organised Hamilton defence. The next chance came on the 42nd minute. Forrest once again crossed the ball into the box and this time Moussa Dembele did manage to connect. The Frenchman’s downward header hit the side netting, though most of the ground thought it was in ( including myself). The final action of the first half came on the 45th minute when, Dembele curled a shot towards the far right corner but the strikers effort hit the top of the bar.

Celtic got the second half underway and started well. They nearly opened the scoring on the 49th minute. Rogic slipped a ball through to Tierney, who cut a pass across goal. It reached Callum McGregor who side-footed it over the bar. The hosts went close again minutes later. Tierney Beat McGowan down the left and nicely picked out Moussa Dembele. His snapshot went just wide of the target. The deadlock was eventually broken after 63 minutes. Hamilton failed to clear a corner from Leigh Griffiths and centre back Dedryck Boyata was in the right place at the right time to tap home the opening goal. Boyata nearly doubled his tally on the 76th minute. Dougie Imrie got caught messing with the ball in his own box and gifted it to Dembele. His shot was blocked well but Boyata”s rebound effort went to high. Celtic had a couple of audacious attempts later in the game but nothing to cause Gary Woods any trouble.

“Obviously I am disappointed to lose as we played extremely well. We limited Celtic to very little chances today. Our defence was absolutely solid for the whole game apart from the goal where we switched off and have been punished. However, I do think we need to add a goal scorer to our team as we lacked an attacking option. Something like that could be very vital this season. Delphin Tshiembe looks a very talented player and looks to have helped our defence massively along with Aaron McGowan. Now we have 4 huge games coming up, playing 4 of our most likely bottom 6. Firstly we start with St Johnstone on Saturday”